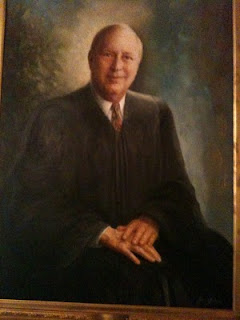 It was a real tribute. So many friends, colleagues, judges, family turned out to pay their respects. Judge Graham spoke beautifully about Judge Davis, as did Ned Davis (the judge's son). We all shared stories about him over drinks, as he would have liked.
Chief Judge Moreno was in Europe and sent this email regarding Judge Davis:
He was a great man and a good friend. I tried cases before him and found him to be the perfect example of a judge I should emulate but whose qualities of patience,fairness and moderation I could never attain. The 10 years we were colleagues were an incredible experience that made him my best friend on the court. When I became Chief we continued our friendship lunching at Abbracci often where I welcomed his sage advice. What a great human being. I consider this loss like losing a second father within 2 months, as I lost my dad in March. I have been in Europe for the last two weeks and do not return until after the funeral. Please explain my absence at the Biltmore to Pat Davis as well as those others (past law clerks,AUSAs, FPDs, private lawyers) personally or even through your blog.Have fun on Thursday and toast to him as that is what Ned would want all of us to do. FAM
Posted by David Oscar Markus at 9:20 AM