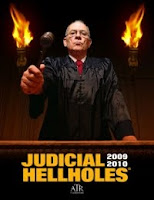 The American Tort Reform Association has ranked South Florida as the #1 "Judicial Hellhole" in the nation. How silly. Here's what they say:

South Florida, the home of WhoCanISue.com, is known for its medical malpractice claims, never-ending tobacco lawsuits and generous verdicts. Trial practices favor plaintiffs, as exemplified by a string of reversals in a Miami-Dade case against Ford Motor Company. Florida is also developing a reputation as the place to bring slip-and-fall lawsuits due to its lower burden of proof compared to other states, making the state ripe for fraudulent claims. Supermarkets, corner stores, and restaurants have no choice but to settle, regardless of whether they could have prevented accidents. In addition, Florida is one of the few states that allow those who drive under the influence of alcohol or drugs to sue the automobile manufacturer for failing to prevent their injuries by designing a safer car, while hiding from the jury the driver's responsibility for the crash. South Florida is home to several legal scandals this year, in which lawyers enriched themselves with their clients' money and bought hospital records to solicit business. Even the organization representing plaintiffs' lawyers in the state has found itself in hot water.
Posted by David Oscar Markus at 5:07 PM

Well of course this is a Judicial Hell hole, but not for the reasons stated. Have you been to Broward Lately?

Highly lame as usual from that group.