Kim Rothstein in the news 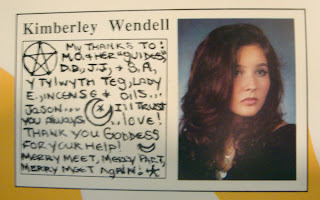 scooped him!
From the article:

A health crisis struck when she was 12. She collapsed at a Plantation Central Park karate tournament. Doctors found she had a blood vessel disorder in her brain, a condition that causes seizures and headaches. She took a break from her beloved sport.
A 4.0 student at Seminole Middle School in Plantation, she became depressed and her grades slipped, the Sun Sentinel reported at the time.
But she made a comeback, despite the health risks.
"She's a great example of a never-quit attitude,'' her late grandfather John Shaffer told the newspaper.
"She is both charming and intelligent. Her accomplishments in karate are rather amazing,'' her doctor told the newspaper.
She went on to South Plantation High School.
After graduating in 1992, she and her mother owned and operated a wellness center on University Drive in Davie, selling books and offering classes on yoga, belly dancing and reiki. She is a spiritual person, a practicer of Transcendental Meditation, and a good person, said Linnet O'Neal, a longtime acquaintance. Since meeting her now-husband, Kim has been studying Judaism.
O'Neal shopped at the store and eventually bought it from Kim's mother, a spiritual adviser who now works at a holistic health center.
"You've heard of people who are gifted clairvoyantly, who have intuition where they guide people almost as a life coach? Lynn is a wonderful teacher, and very humble and giving person. And Kimmie is a very humble and very sweet girl,'' O'Neal said.
About nine years ago, Kim Rothstein went back to school to obtain her real estate license, making her mother proud, O'Neal said.

Should this really be the subject of the blog? Why no Tiger Woods gossip?

Maybe that just means Kim Rothstein isn't a true blond, but a dye-hard wannabe. Get it "dye" hard, not "die" hard. The fake hair color is good enough for Mr. Tiger "can't keep it in the pants" Woods.