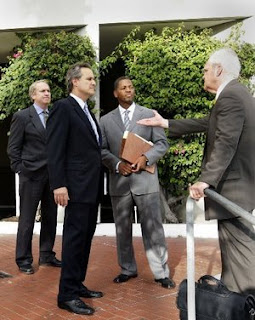 Here's a nice article by the AP's Curt Anderson summarizing today's openings. Here's some of the back and forth:
Ana M. Jhones, an attorney for alleged ringleader Narseal Batiste, told the new, racially mixed jury of seven men and five women that the FBI agents and prosecutors sought to build a case at any cost against the men from Miami's impoverished Liberty City neighborhood.
"This was about desperation - desperation to justify something that never happened," Jhones said in her opening statement. "We have a fabrication, a setup, of six young black men from Liberty City."
Prosecutors, however, said the FBI was right to aggressively follow tips that the group was discussing the overthrow of the U.S. government through the bombings and forming alliances with Islamic extremist groups. Although the men never obtained any weapons or explosives to carry out any attacks, prosecutors said the crime was in their agreement to do so.
"They had the will, they had the heart, they had the soul to do harm to this country," said Assistant U.S. Attorney Jacqueline Arango. "All they needed was assistance, and al-Qaida was that ticket."

The picture at the upper left is from the Herald article. Pictured are:

Don't know who the others are, but I do see freakin ROD VEREEN, the man, in the photo.