Phone arguments in the Supreme Court

The WSJ Journal covers the 2020 phenomenon here, and SCOTUSBlog has a bunch of the Art Lien sketches here. From the WSJ:

Neal Katyal has argued 43 cases before the Supreme Court. Until the coronavirus pandemic hit, he hadn’t once enlisted his son as an assistant.

Now, Mr. Katyal and other lawyers appearing in the nation’s highest court have to argue their cases remotely, which often means from home. In November, as Mr. Katyal prepared in his home office to represent the city of Philadelphia in a case about religious objections to same-sex parents, he worried about the street noise.

So he gave his 19-year-old son $100 and instructed him to go outside and dole out cash to quiet down any noisemakers. Sure enough, minutes before the hearing began, a truck rolled up, idling loudly.

“Oh my God, the justices are going to be so mad at me,” Mr. Katyal, who served as acting solicitor general in the Obama administration, recalled thinking. Fortunately, the truck drove away without his son having to intercede.

For the nation’s Supreme Court lawyers, being freed from the decorous norms of appearing in person before the high court has brought a new set of questions. Where to work? What to wear? What kind of phone to use? And how to stay in order in a telephone courtroom?

Some advocates have tried to replicate the high court’s pomp, dressing in business attire and setting up mock courtrooms to evoke the real-life setting. Others have donned sweatshirts and planted themselves behind messy desks.

Although I didn't get a chance to call in to SCOTUS, I did have a telephone argument, as well as a Zoom argument, in the 11th Circuit this year.  Zoom was definitely preferable as you actually get to see the judges instead of just listening.  I have another one coming up in February, so it looks like Zoom for the foreseeable future.

I like these two sketches from Lien on both ends of the formality spectrum: 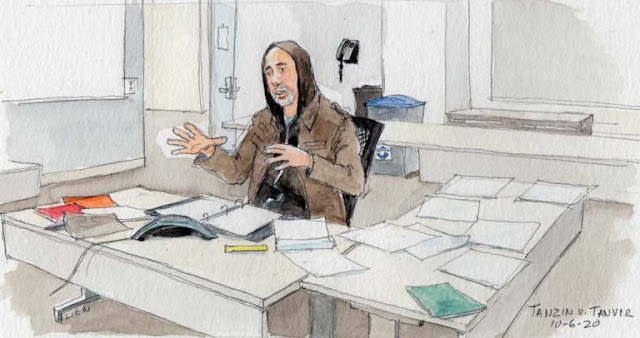 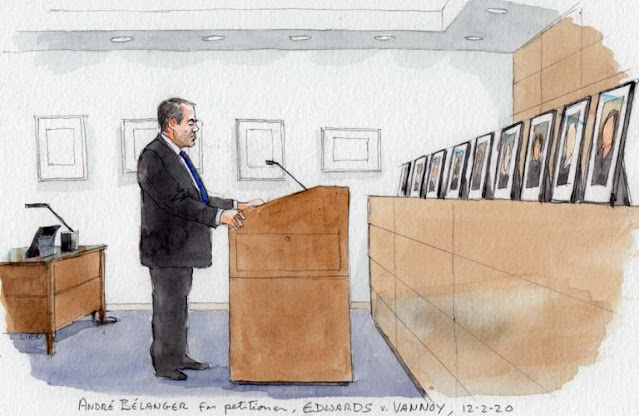 As for me in the 11th, I wore a jacket, but no tie, for the phone argument and a regular old suit and tie for the Zoom argument.