Unfortunately we can't watch it (as we did with the Rittenhouse trial).  How absurd.

So, we need to rely on short news stories about the drama in court, which of course, are always skewed toward the government.  Here's NBC News:

Theranos founder and former CEO Elizabeth Holmes returned to the witness stand Tuesday, confirming key aspects of the prosecutor’s allegations behind the 11 counts of fraud she faces, but asserting that there was nothing wrong in what she did.
The prosecution has repeatedly shown jurors lab reports emblazoned with logos of the pharmaceutical companies Pfizer and Schering-Plough. Witnesses from those companies who worked with Theranos testified that the use of the logos was unauthorized and they were unaware of it at the time.

Holmes admitted that she was the one who had added the logos to Theranos lab reports and sent them to Walgreens as she pursued a deal to put her blood-testing startup's diagnostic machines in the pharmacy's retail stores.

Holmes acknowledged that in some cases, Theranos used third-party devices, rather than its own equipment.

“This work was done in partnership with those companies and I was trying to convey that,” she said by way of explanation. "I wish I had done it differently,” she added.

Addressing another key point made by the prosecution, Holmes said that when Theranos switched from using on-site analyzers to process samples to a centralized lab approach, it used third-party devices rather than its own equipment as an “invention” because there were too many samples to handle. Witnesses have testified that Theranos' signature blood-testing machine repeatedly failed quality assurance tests and delivered erroneous results. Holmes said the company didn’t tell its business partners about this arrangement because it was a trade secret.

She rebutted the prosecution's arguments about some of the alleged misrepresentations she made to investors, the media and business partners, affirming that she had received specific positive reports from employees and outside experts and believed their statements to be true.

And we can't even see images of the courtroom... we get sketches instead. 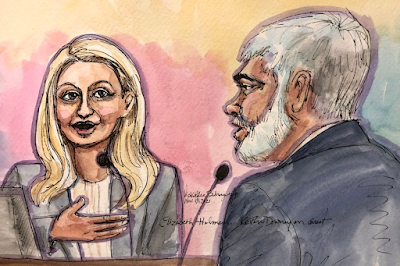 Anyway, I hope all of you have a Happy Thanksgiving... even you Rumpole.
Posted by David Oscar Markus at 7:53 AM

Happy Thanksgiving to you and yours David.

That sketch is ridiculously inaccurate.

When are they going to allow cameras in federal court ? What are they afraid of ?