1.  Amy Comey Barrett finally got to meet her colleagues in person.  From CNN: 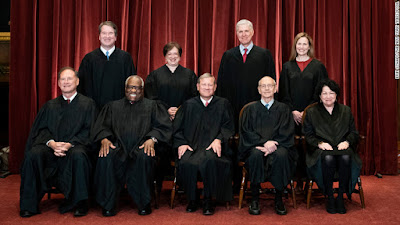 The defense has said it was impossible for Chauvin to get a fair trial in Minneapolis because of pretrial publicity and community pressure on jurors to convict. That claim is sure to underpin any appeal.

As they arrived at and left the courthouse each day for testimony, jurors passed clear signs that the city was preparing for renewed protests. The courthouse downtown was encircled by razor wire and guarded by armed troops. Most storefront windows were boarded up.

A prime target of an appeal would be key rulings by trial Judge Peter Cahill, including that the trial should remain in Minneapolis rather than be moved and that jurors should be sequestered only for deliberations.

Cahill also refused to delay the trial after Minneapolis announced a $27 million settlement with Floyd’s family during jury selection. The defense says that suggested guilt before jurors even heard evidence.

The defense has decried as prosecutorial misconduct remarks by the state during closings, including that aspects of the defense case were “nonsense.” That claim could make its way into an appeal.

3.  Is it a federal crime to inflate your law schools U.S. News rankings?  Orin Kerr has this thread looking at this interesting question.  The 11th Circuit's Takhalov opinion will be a hurdle...

4.  Yours truly was in SDNY this week.  Here's some coverage from Ghislaine Maxwell's arraignment.

Posted by David Oscar Markus at 11:02 AM

On 3, B-Girls definitely gets in the way of a conclusive finding of Fraud given consumers received exactly what they purchased.
This instruction was tested in the yet unresolved MailFraud case a few years back knocking out all Fraud and Money Laundering charges, leaving only Conspiracy where the defendants are still tangled in misconduct proceedings before the court.

What is taking the government so long to drop it? They got caught red handed with defense materials they lied about under oath.

SDNY had a milder but similar situation, in a much more serious case involving Terrorism, and they walked away to defend the integrity of the office. Unless the argument is that the USAO doesnt have much to defend.