And it's going to be a doozy.  It's called 537 Votes and is about the 2000 presidential recount in Florida or what Billy Corben and Alfred Spellman call a heist.  It's premiering on HBO Max on October 21. 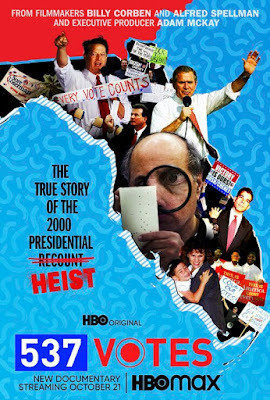 In early 2000, the international custody battle over a six-year-old Cuban boy, Elian Gonzalez, triggered a political earthquake in the swing state of Florida, ultimately swaying the outcome of the presidential election. With Miami’s largely conservative Cuban American population outraged at the Clinton administration’s handling of the repatriation of Gonzalez, many called for “el voto castigo:” the punishment vote, to harm Vice President Al Gore’s chances at the ballot box. Miami-Dade County mayor, Democrat Alex Penelas, dubbed People magazine’s “Sexiest Politician,” is surprisingly absent from Gore’s side as election fever mounts. After election day, with the margin of victory hinged on Florida, weeks of chaotic ballot recounts, lawsuits, counter lawsuits and public protests ultimately ended with George W. Bush winning the presidency by a mere 537 votes.

On election day, November 7, 2000, in one of the narrowest election margins in history, it all came down to Florida, where the state’s 25 electoral votes would decide the next president of the United States. The press called Florida for Gore and then retracted it, and Fox News called it for Bush. Gore called Bush to concede, and then all networks deemed Florida “too close to call.” Gore then retracted his concession and the recount began.

Both parties braced for a bitter and lengthy legal battle. Bush’s campaign mobilized its troops, rallying local Cuban Americans and national GOP figures such as former Secretary of State, James Baker. In turn, Gore’s side hired former Secretary of State Warren Christopher and called for a manual recount in four Florida counties, including Miami-Dade. Under heavy scrutiny were 10,750 “no vote” ballots, where “dimpled,” “pregnant” or “hanging” chads were not counted by the tabulating machines. After 36 days of legal maneuvering and appeals on both sides, the U.S. Supreme Court, with a conservative majority, ruled to stop the manual recounts, thereby granting the presidency to George W. Bush on December 12, 2000.

The best documentarians have another classic on their hands.  And another only-in-Miami story.

The key here was Bush (or, ahem, his father) hiring James A. Baker, the all around Republican establishment go to guy in a crisis. Another point: the Constitution gives state legislatures the absolute power to appoint electors. So with all the hoopla going on, The state lawmen could simply have voted that Bush had won the state and that would have ended it. Ditto if the Dens controlled the chamber.

And then came isis, and now we are retreating from Afghanistan. What a fucking 20 years. Thanks Bush.

The real issue had to do with reversing the Supreme Court of Florida which changed the rules after election day. If you study the opinion, you will see that was a 5/4 vote. By adding the constitutional issues, they got to 7/2.
I am sure that the documentary is tilted to the left, and they will say that Secretary Baker changed the result. If he did, he did it at the Suprmem Court of the United States.
I am really concerned about having this election decided by the Court. Two times in 20 years is too much. Better to have Drooling Joe as president than that.

By the way, Secretary Harris offered to have a total statewide recount within the first couple of days, but the Gore people thought they would be better to try to get it limited to four counties. They rejected the offer.