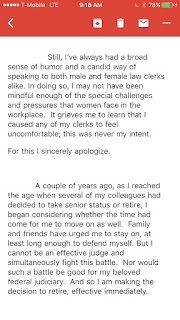 ORIGINAL POST: The Washington Post had another front page article this weekend, detailing another round of Judge Kozinski allegations.  It’s not pretty.  Above the Law explains:

And that’s really been the nugget at the core of any defense of Kozinski. He was “only” joking, or that he should get a pass or a mere slap on the wrist because his behavior didn’t cross the line into the physical. But in the new WaPo article more women are coming forward with allegations that seem to cross that line and are deeply unsettling.

Take the story of Christine O.C. Miller, who is now a retired U.S. Court of Federal Claims judge. She says that in 1986 she attended a professional event with Kozinski and shared a car ride home at the end of the evening. During that ride Miller alleges Kozinski asked her to stop at a hotel and have sex. When she rejected his advance, she alleges things turned physical:

“I told him, no, I wasn’t interested and didn’t want to be involved in anything like that,” she said. Kozinski, she said, persisted.

“He said if you won’t sleep with me, I want to touch you, and then he reached over, and — this was the most antiseptic — he grabbed each of my breasts and squeezed them,” Miller said. She said she stared straight ahead, and he soon dropped her off at her home.

When does #metoo hit SD FL?

Brilliant Judge...always had a prurient bent.
I did a post on when this would hit Miami Judges. Lots out there. So far nothing...

Not justifying the behavior, just noting it.

unfortunately, Rumpole is dead on. Read your history carefully my friends. If we could do a historical mulligan, RR's career in Hollywood would have been fair game in 1980. He was an old school skirt chaser. I doubt he would have survived today's ethos.

Rumpole is always dead on...we made two mistakes this year and the year is almost over.

In April 2017 Kozinski appeared on 60 Minutes and criticized the federal courts, covered by DM on this blog. Any connection between Kozinski’s 60 Minutes appearance, and the current allegations of sexual misconduct leading to his retirement?

Posner responded to DL’s email, "Nice to hear from you, David. And I’m not taking senior status; my departure is total. It has to do with fact that I don’t think the court is treating the pro se appellants fairly, and none of the other judges agrees with me (or rather, they don’t like the pro se’s and don’t want to do anything with them, with occasional exceptions only)."

I may be in the minority about Petersen. The man has devoted nearly his entire career to public service. He didn't deserve to hung out to dry by the White House and Kennedy. If Kennedy thought him to be unqualified, he could have gone to Petersen and the WH. Don't embarrass him in public.