Adam Rabin, the author of this post, is a partner at McCabe Rabin.  Photo credit to Daniel Portnoy Photography. 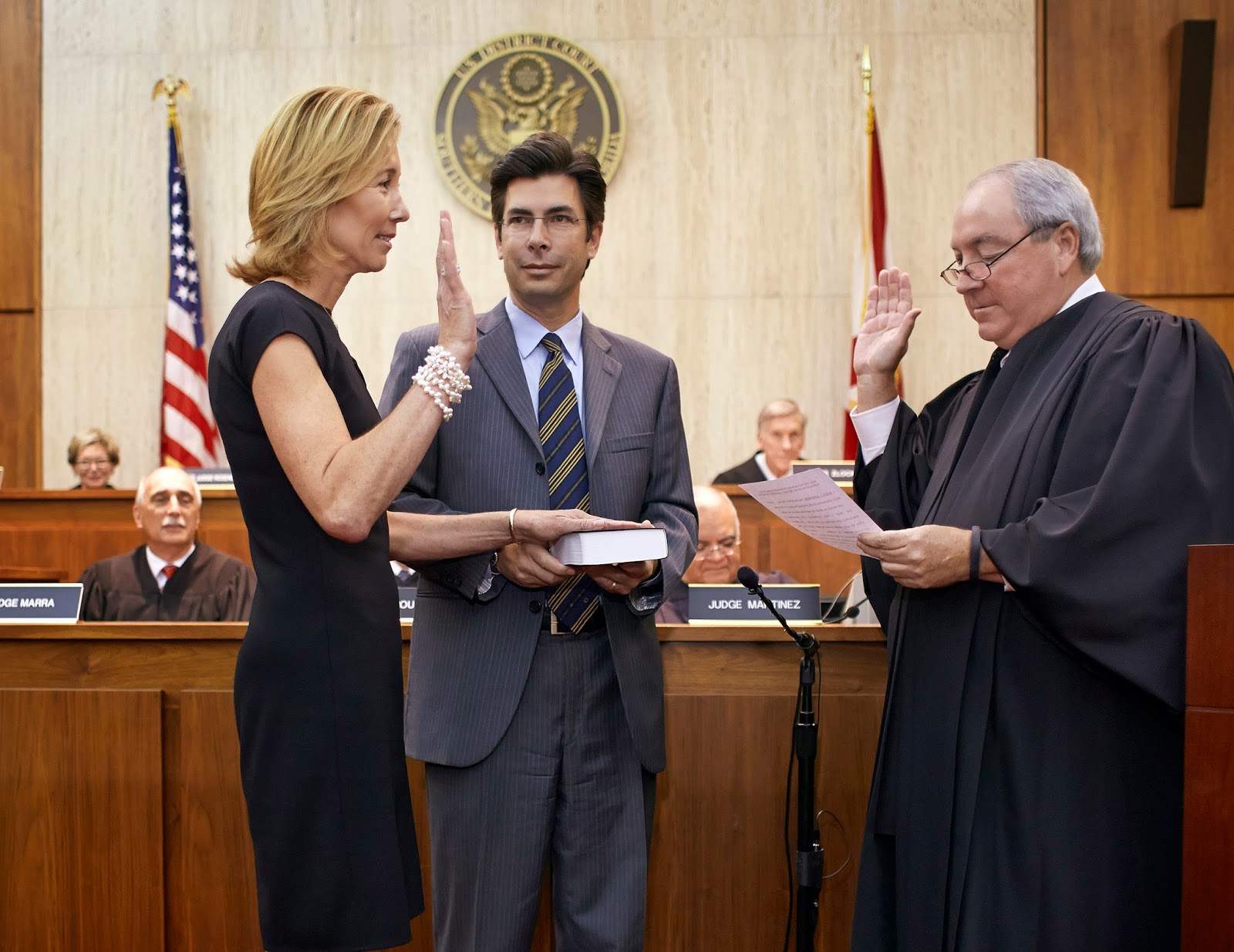 On November 14, Southern District of Florida Chief Judge Michael Moore swore in Judge Robin Rosenberg as a District Court Judge before many federal and state court judges, bar leaders, family and friends.   The ceremony was moving and captured the personal side of Judge Rosenberg.

The investiture led off with Jonathan Paine, the son of the late U.S. District Judge James C. Paine, whom Judge Rosenberg clerked for after graduating from Duke Law School.  Jonathan spoke of how life comes full circle sometimes with Judge Rosenberg’s getting sworn in the same court room as Judge Paine had presided back when Rosenberg was clerking for him.

Past President of The Florida Bar, Scott Hawkins, presented the Bible and spoke of the nearly 75 hearings that he had before Judge Rosenberg in a hotly contested state court case over the last few years and how she never raised her voice once or lost her composure during the proceedings.

Fourth DCA Judge Robert Gross, with whom Judge Rosenberg occasionally sat as an associate judge, spoke of her work ethic and legal acumen.  Judge Gross also told a story on how his clerk performed an appellate review of a case that Judge Rosenberg handled as a trial court judge and had to enter a separate order on 70 different motions.  One by one, she did not just enter granted or denied.  Instead, she engaged in a separate, individualized legal analysis on each motion with findings and conclusions. The law clerk commented to Judge Gross that he had never seen anything like it.

The show was stolen, however, when Judge Rosenberg and McAuliffe’s elder daughter, Sydney Rosenberg McAuliffe, a freshman at Duke, took the podium.  She spoke of the accomplishments and role-modeling that her mother had provided for her and her younger brother and sister as a professional.  More significantly though, Sydney spoke of their close, best-friend relationship and that while her “mom accomplishes more than most by dawn,” it is her love for and unyielding investment in her children that was her most laudable accomplishment.  Most of the audience had to brush off the tears.

If you have never been to a federal-court (or state-court) judicial investiture, you should attend one.  They always remind me of how fortunate we are to practice law, re-instill the importance of professionalism and civility in our profession, and reinforce how family and friends contribute greatly to one’s success.

Congratulations to Judge Rosenberg on an investiture that had most attendees smiling through the weekend.

Wow. I've never seen a report like this from David. I, for one, say Adam is hired!

Not so fast 6:55 p.m. See paragraph 2: "for whom Judge Rosenberg clerked for." Awkward, don't you think?

This guy's got a future. We're hiring!!

I would have more confidence in a well-programed computer to reach a fair and just decision than a lawyer-judge.

Breaking news: Moore Hires Rosenberg's trainer! Vows to complete his first 5K and 5k.1 by the end of next year.